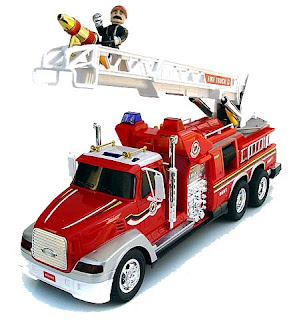 Last night I sat on the cold bumper of a fire truck parked in front of my house and told a young, dashing male paramedic surrounded by burly firefighters, "well, I'm transgender and I, uh, breastfeed my baby."

He didn't blink an eye. I guess he sees all sorts of strange people in strange situations all night long and he was just doing his job. I, however, was a little bewildered to find myself coming out in this fashion.

This weekend I had the flu, or maybe food poisoning, and I was still feeling nauseous last night. I was nursing Jacob in bed when our carbon monoxide detector went off. Ian opened the windows and doors and called police non-emergency but was told that he ought to dial 911. Could be deadly serious. We waited outside on our front steps and the fire truck pulled up within minutes.

Since carbon monoxide poisoning can resemble flu symptoms, the paramedic wanted to check me out while the firefighters went inside to measure the CO levels. He took my vitals and soon asked, "are you on any medications?"

"Yes, I take domperidone." This is a drug normally prescribed, ironically enough, for controlling nausea.

"And what do you take it for?"

So my lovely paramedic got a mini-lesson in lactation - queer lactation, at that.

As it turned out, it was all a false alarm. The firefighters determined the house to be fine, and I must have just had the flu. Unfortunately Jacob is not yet at an age where he can appreciate a fire truck but all the commotion left him wide awake until 1:15am. We'll be replacing our CO detector today.

And while I'm on the subject of domperidone, Health Canada recently came out with a new warning against its use: http://www.cbc.ca/news/health/story/2012/03/08/domperidone-maleate-drug-.html

Breastfeeding expert Dr. Jack Newman had this to say about it on Facebook: