My team's research article about transmasculine individuals' experiences of lactation, chestfeeding, and gender identity has been published!!! It's open access. Please share widely!

In this University of Ottawa study, funded by the Canadian Institutes of Health Research, I interviewed 22 transmasculine individuals.


Here’s a quick overview of what’s new and exciting about this paper:

3)     Zero of the participants’ surgeons discussed the potential for future chestfeeding before performing top surgery. Equally important, participants reported that they didn’t feel comfortable bringing the topic up, either. They cited their surgeons’ strong and obvious belief in the gender binary and the feeling that they needed to tell the right story in order to access chest surgery.

4)     Changes in secondary sex characteristics during pregnancy. References in the academic and medical literature state that a low-pitched voice and facial hair are permanent results of taking testosterone. However, in this paper, we report the experience of one participant who found that when he stopped taking testosterone and became pregnant, his facial hair literally fell out and his voice became higher in pitch.

6)     Unexpected and unwanted lactation. Several participants who had had chest surgery and chose not to chestfeed their babies experienced problems with milk coming in. One had early symptoms of mastitis. Both the participants and their health care providers were unprepared.

7)     How gender dysphoria can be triggered by health professionals. We tend to think of gender dysphoria as something that a trans person experiences because of their body. In this study, we found dysphoria could be triggered, in a person who otherwise was not experiencing it, by the way they are treated by others. From the paper: “care providers and others are capable of causing gender dysphoria in a patient by misgendering them. Conversely, care providers can affirm a patient’s gender identity through appropriate language, respectful touch, and other intentional actions, and thus alleviate distress associated with gender dysphoria.” In other words, the act of chestfeeding itself might not cause gender dysphoria for a transgender guy, but a health care provider talking about putting baby to “mom’s breast” might do so.

8)     Using donor milk. Seven of the 22 participants said they used or intended to use donor milk, and one donated milk to others.

9)     The language. This study was trans led, and the language used throughout the paper is appropriate for our community. We didn’t say in this paper, “some trans men use this word chestfeeding” and then ourselves use breastfeeding or nursing after that when we wrote in our own words. We used chestfeeding throughout the paper, as THE word. Why? Some trans guys are okay with “breastfeeding,” but some are very triggered by it. We didn’t think any trans guys would be triggered by “chestfeeding,” so we decided to use that term throughout.

What a way to celebrate the International Day Against Homophobia, Transphobia and Biphobia!

With so much thanks to the study participants who made this possible, and my research team members Joy Noel-Weiss, Diana West, Michelle Walks, MaryLynne Biener, Alanna Kibbe, and Elizabeth Myler. Big thank you as well to Karleen Gribble for her detailed comments in the open peer review process!

"Where's the Mother? Stories from a Transgender Dad" is now available for preorder wherever books are sold. I'll be appearing at two launch events: one in Toronto and one in Winnipeg. I hope you and your friends can attend! 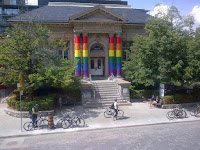 Trevor MacDonald reads from his book Where's the Mother: Stories from a Transgender Dad. Trevor founded the first online support group for transgender people interested in pregnancy, birth, and breast or chestfeeding. He shares his own parenting experiences on his blog,www.milkjunkies.net. Join us for a reading, Q&A, and signing session. This is a child friendly event so bring the whole family!

A book launch tour event with Trevor MacDonald, who will read from "Where's the Mother? Stories from a Transgender Dad". Trevor will be on hand for discussion and book signing afterwards.