Hanging on to My Kid 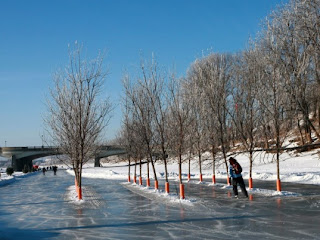 If you are depressed in the winter time in Winnipeg, my best suggestion has always been to bundle up your kids and head outside onto the city's two frozen rivers at the Forks. Many days lately have been sparkling, sunny, and even somewhat warm.

It often seems like a great effort to get going and make it out with little ones in the winter. I feed Jacob and change him right before leaving and then hope that he'll be happy enough during our adventures to hang on until we get back home. I strap him into my cloth carrier, put my gigantic winter coat over both of us, leash up the dog, and off we go for our walk. Down on the river path we amuse ourselves by watching kids skate past - some of them are toddlers who are sliding along for the first time, doing little more than a funny-looking shuffly walk while others are macho teens rocketing up and down the river despite gaping cracks and holes in the ice. Jacob smiles at the border collie dogs who zip by pulling their owners on cross-country skis. Everyone out there seems to be laughing and we almost always stop to talk to someone we know. Winnipeg is a small town.

Sometimes we see something truly bizarre. A few weeks ago, Jacob and I crossed paths with a man and a woman, skating cautiously, holding their infant in a car seat between them. Now, I don't even like to walk that way, but skating, carrying a bucket seat? Really?

I had to say something. "Well, that's an interesting way to do it. Looks like you're having fun."

"Yeah, we don't have a stroller yet but we really wanted to get out."

I replied, "I tried to skate with this little guy on the path in a stroller but he would have none of it. He wanted to be held."

The man explained to me, "Oh, we've been very careful since the beginning to not let ours get used to being held. I mean, that would be like being in prison - he'd want it all the time."

I think I stared blankly for a moment and then wished them a lovely afternoon. When we North Americans don't want to be "tied" to our babies, we tie them down instead to an unending variety of inanimate devices. We strap them into car seats (whether or not we are driving anywhere), strollers, bouncy seats, jolly jumpers, and excersaucers and shut them up in cribs, bassinets and playpens. All this to avoid an adult human holding a human baby, because that would be nothing less than incarceration.

And yet I feel the opposite of a loss of freedom when I'm holding Jacob. With him snuggled up against my chest I know that I can comfort and protect him against anything, and this makes me feel safe. All I can say is that at least everyone in that family I met was outside enjoying the sun's rays and their promise of spring to come.